Following a few more instances of Louis Catorze thundering through Le Château chasing his tail (and knocking Houseguest Matt’s stuff off his bedside table at 3am – ha), I’ve spent most of the weekend Googling coloured dye for pets. I wish I were joking.

Most of the results of my fact-finding odyssey have been warnings not to dye your pet, and I can’t say I’m surprised; until now I’d have thought it a thoroughly idiotic thing to do. And, had anyone tried to convince me that they needed to do it for medical reasons, I would have kidnapped their pet for its own safety and reported them to animal welfare.

Yet, here I am, declaring to the world that I need to do this to stop my cat from eating himself. Oh dear.

And, should you choose to ignore the warnings and dye your pet regardless, there are a million stipulations to which Louis Catorze would never agree. (Example: “For best results, start with a freshly washed animal.” Non, merci.)

After receiving the vet’s confirmation this morning that a non-toxic dye might be worth a go, and after a good friend and ardent Roi supporter came up with the genius idea of using plant-based, hypo-allergenic mascara, I thought we might have hit upon a cure. Something toxin-free and designed to be splodged around your eyes couldn’t possibly do him any harm, right? Even Cat Daddy is up for this. And, better yet, I already have an organic mascara.

Or, I thought I had. Naturellement, I have no idea where it is, and I fear it might have been lost in the move to Le Château. (I don’t wear mascara often, clearly.) We don’t want to waste time hunting fruitlessly, nor wait for delivery of a new one, nor do we have time during a horrible working week to go out shopping for one.

Merci à Dieu, then, for Houseguest Matt. There aren’t many people who would unflinchingly accept a request of, “Would you mind popping out today and buying an organic black mascara to paint the cat’s tail?”

I’m tempted to ask him to do the painting, too. Is that going too far?

(Le Roi is pictured below on Houseguest Matt’s legs.) 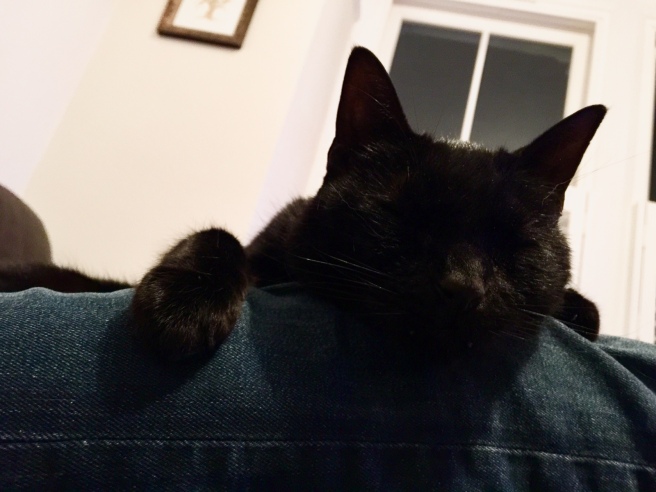