Good news: after the vet advised us to try a mix of different meats to disguise Louis Catorze’s Gabapentin, we have discovered that he will eat it if it’s hidden in pâté de Bruxelles.

Bad news: we only discovered this after enduring this torturous journey:

Further bad news: he won’t eat it unless we also press a layer of his Acana Pacifica biscuits into the pâté.

If you imagine the Gabapentin being the Earth’s core, the pâté being the soft magma and the Acana Pacifica being the crust, you get an idea of how the finished structure is composed. And, once assembled, it looks rather like one of those 1970s mirrored disco balls, except much smaller. And, erm, made of meat.

It’s all a bit absurd. But our place is not to question: our place is just to nod and agree to everything that the Sun King wants.

We have a Code Noir at Le Château: Louis Catorze has started refusing his ham-wrapped Trojan Horse pills. Either he has cottoned onto our trick or he is bored of cured ham and, either way, we are well and truly dans la merde because it means that every single dose is now a Greco-Roman one.

Whilst our Greco-Roman technique is improving greatly with all the practice we’re having, it’s still not very nice to have to do it. And, upsettingly, we can see the effect that the increased Greco-Romans are having on Catorze’s demeanour: he is skittish and nervous around us, and yesterday he didn’t even come and greet us when we came home from work, which he usually does without fail. He has also taken to hiding when we get up in the morning and missing that first dose of the day. This means that we sometimes have to give him TWO doses after work – one when we get home and one before bed – and that makes us all even more anxious and stressed.

Well-meaning fellow cat freaks often ask us, “Have you tried hiding the pills in tuna / anchovies / chicken / prawns / cheese / Dreamies / Pill Pockets / [insert name of other irresistible, pill-disguising treat]?” YES, to all of the above. Unfortunately, we are dealing with a cat who doesn’t like food and therefore cannot be incentivised by it; if we never fed him again, EVER, he wouldn’t really care.

I really, really hope he gets past this, otherwise we will have to deploy the big guns: the £21-per-100g Brindisa jamón ibérico de bellota. Qu’est-ce qu’on va devenir? Or, should I say: ¿Qué va y ser de nos? 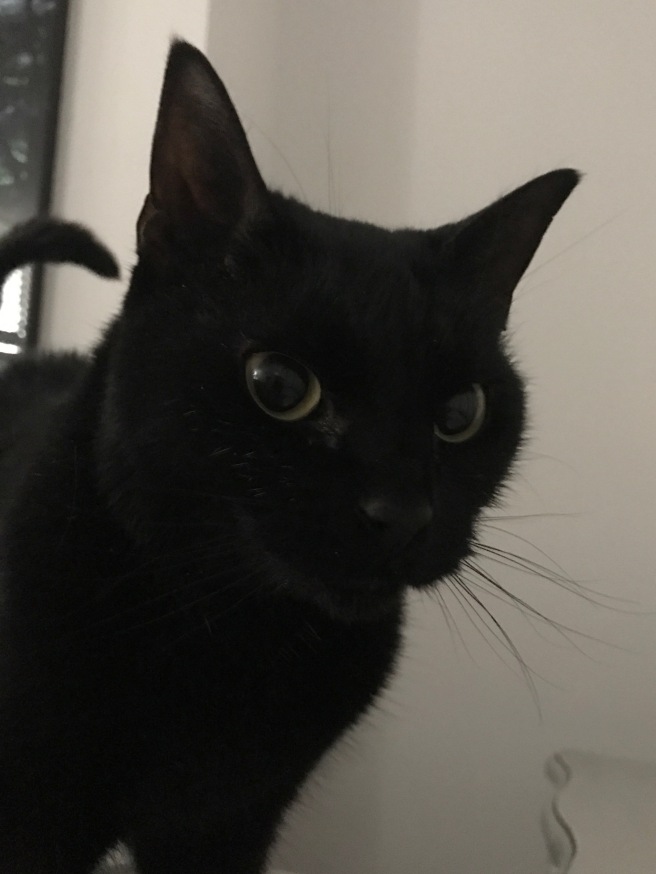 Cat Granny gave me a cheese-making kit for Christmas, and this weekend I finally got around to using it. You wouldn’t believe how much milk is needed – 4.5 litres for a paltry 1kg of cheese – and the only vessel that was up to the job was our massive stock pot. Of course we couldn’t find it.

Cat Daddy and I hunted EVERYWHERE, with each of us accusing the other of having lent it to someone and not got it back. However, just as I was about to go out and buy another one, the realisation dawned that we had used it to boil up the turkey carcass after Christmas and had put it in the greenhouse as it wouldn’t fit in the fridge.

It was still in the greenhouse.

We trudged outside, fearful of what horrific life forms we would find inside the stock pot after 3 whole months of festering away, although, luckily, it was dark so we couldn’t see much. The idea was to drain off the liquid and then dispose of the solids in the food waste bin but, as Cat Daddy was draining it, the stock pot somehow slipped and the entire grim contents splurged all over the flower bed.

Naturellement, Louis Catorze – who had followed us, unseen, into the garden – decided to leap straight into the midst of the oily, mouldy, turkey-y mess and have a good old cavort around in it. Then, when we tried to grab him and fish him out, he pitter-pattered into the greenhouse where we couldn’t reach him, but where we were sure that the oily, mouldy, turkey-y mess would act as a glue to stick dirt, cobwebs and dead spiders to his fur.

“We can’t let him back into the house like that,” said Cat Daddy. “His fur is going to be disgusting, and that greasy muck will never come out of the floorboards or furniture. We’re just going to have to leave him outside until he washes, or until the rain rinses it off, whichever comes first.”

One day we will let him back in again, but today isn’t going to be that day. Tomorrow probably won’t be, either.

We’ll let you know if and when it happens. 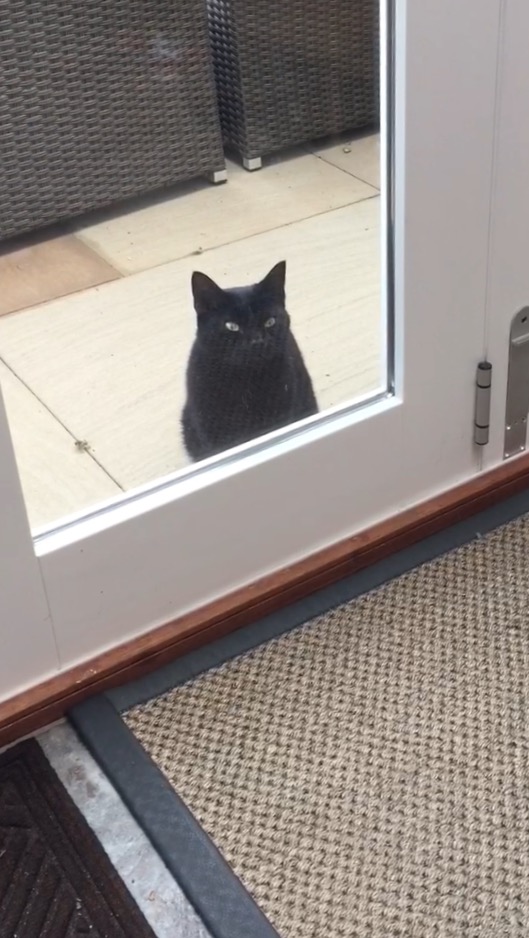 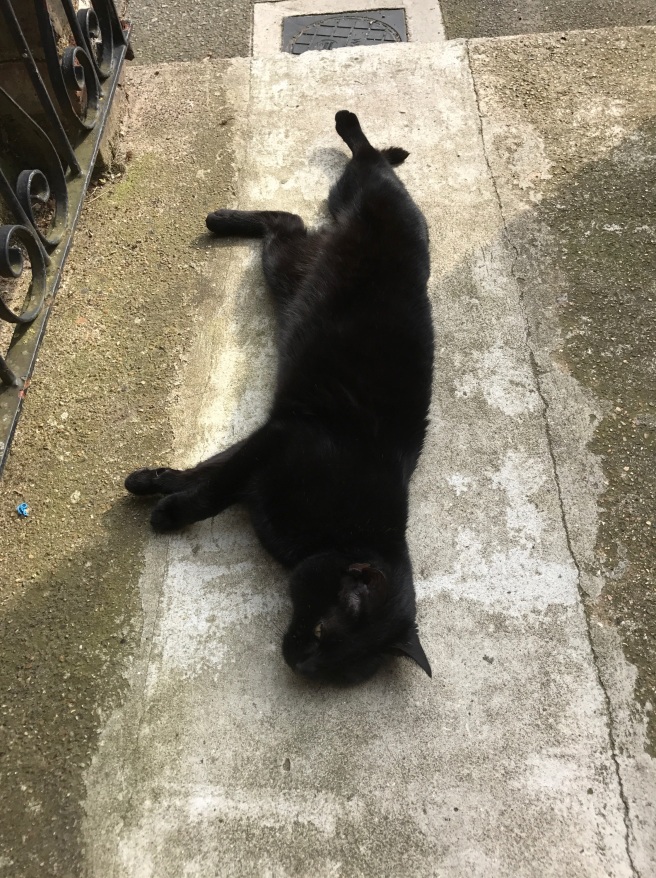 Louis Catorze, who used to smell of fresh, zingy lime with a hint of blossom, now smells like a dead sheep that’s been left out in the rain.

I think I preferred him before.

Even Cat Daddy commented, “He’s been smelling really catty lately. Had you noticed?” Yes. It’s pretty hard not to.

It’s not a hygiene problem; Louis Catorze has always been scrupulously clean and, even during his maximum security Côning period, we were usually able to release him for long enough to groom himself properly. It seems to be more of a physiological issue, with the horrible smell emanating from his pores rather than being trapped on the surface of his fur. The only new things that we’ve introduced into his routine in the last few months are, erm, the salty cured meat and the copious amounts of prescription drugs. So it’s probably both of those things.

Whilst perfumed products for cats are generally a no-no, for those suffering from feline hyperesthesia it’s even more important that their environment is kept toxin-free, so there’s no hope of dousing him in something fragrant to get rid of the smell. And, of course, we can’t stop the pills, nor can we stop the red meat as it’s our only hope of him taking the pills, so it looks as if we’re stuck with the stench.

Cat Daddy’s final word on the matter: “He doesn’t know from one day to the next whether he’s going to get prosciutto di Parma, jambon de Bayonne or jamón Serrano. Maybe his digestive system is confused and just doesn’t know what to do with itself anymore.”

10 minutes before the appointment time, when we should have been on our way there, we were chasing Louis Catorze around the house, Benny Hill style (younger followers: ask your parents), as he darted under furniture and refused to be caught.

We cornered him eventually but he screamed all the way there and whilst we sat in the waiting room. Cat Daddy then told me that he’d had a horrendous – and only partially-successful – Greco-Roman session this morning, which was probably why the little sod had been such a nightmare.

After greeting us with, “Louis is famous here – we’ve all been talking about him!” the vet told us that we could reduce his Gabapentin from 5 to 4 pills a day, but that we were to remain on 4 for a month. If all goes well, we may be able to reduce to 3 per day in early-to-mid April.

To be honest, we really had hoped he would be off the pills by then, because he has started to refuse Trojan Horses if the cured ham is 2 days old. (Yes, the previous cut-off point was 3 days. But that was before.)

He is also becoming fussier about the type of ham used, and the vet was in hysterics when Cat Daddy uttered the words, “He likes prosciutto di Parma and jambon de Bayonne, but not the jamón Serrano that I bought this week.”

Anyway, we’re now home and he’s still not talking to us. This is going to be a l-o-n-g evening. 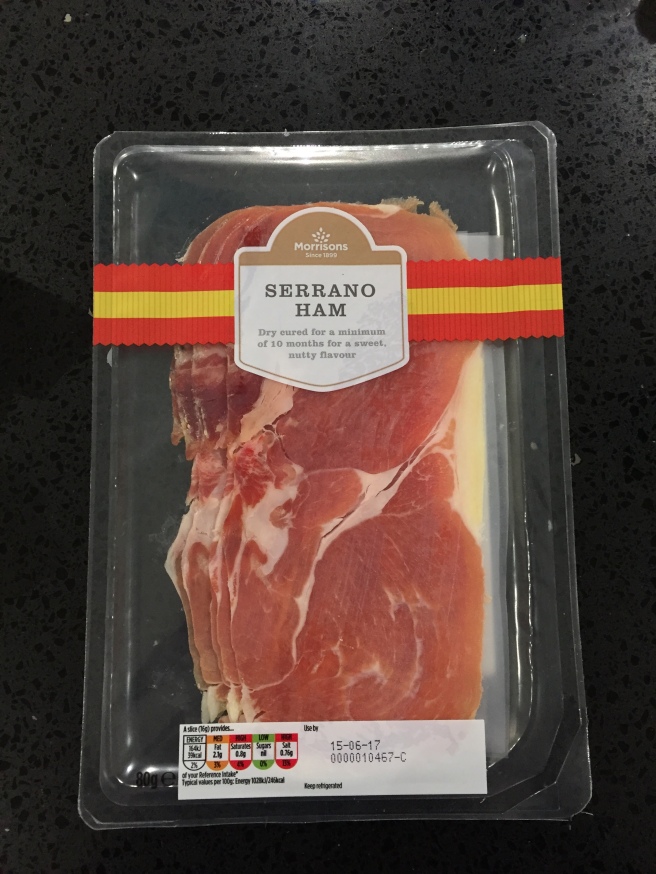 Bad news: Sa Majesté has started to refuse jambon de Bayonne that has been frozen and thawed.

And, if I’m honest, it’s not really working for me, either, because, once it’s been defrosted, it’s almost impossible to get it to stick around the pill. So bulk-buying and storing in the freezer is now no longer an option; it really is either fresh packs, newly-opened, or Greco-Roman pill delivery.

This means that we have been buying a LOT of cured ham, of which Le Roi only eats a small amount per pack before turning his nose up at its unacceptable lack of freshness. Fortunately we like cured ham, so we have been eating the leftovers ourselves. That’s right, Mesdames et Messieurs: WE EAT OUR CAT’S REJECTED FOOD.

The little sod has also got to recognise the sound of the pills rattling in the jar, and he runs when he hears it. So I have had to start turning the taps on every time I dispense the pills but, as a friend pointed out, pretty soon he will get wise to the sound of the taps and I will need another sound to drown that out, then another sound to drown THAT out, and so on. Taps today, but what tomorrow? A marching band and low-flying aircraft were just two of my friend’s suggestions (and she was only half-joking).

It’s becoming more and more clear who wears the crown in Le Château. 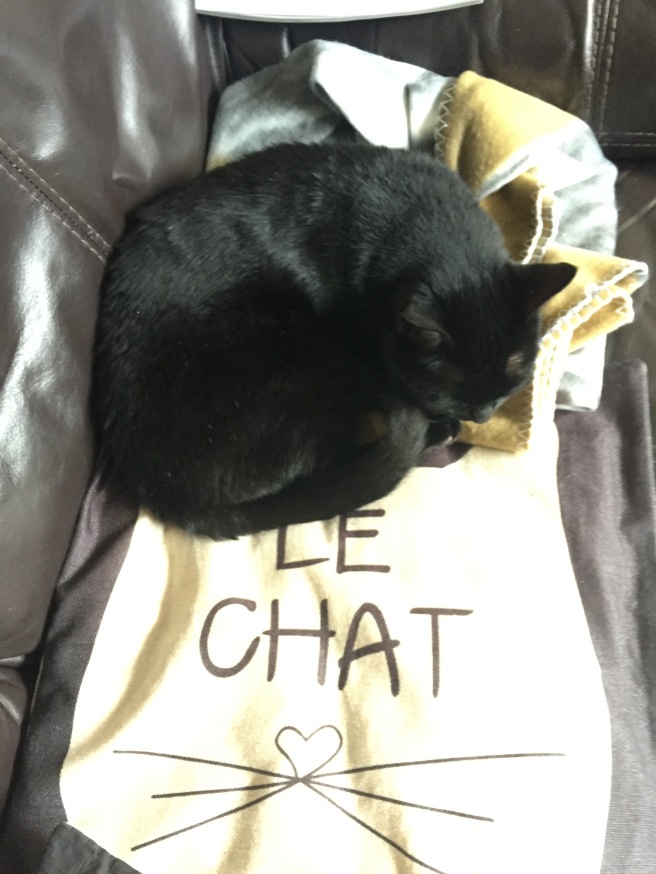