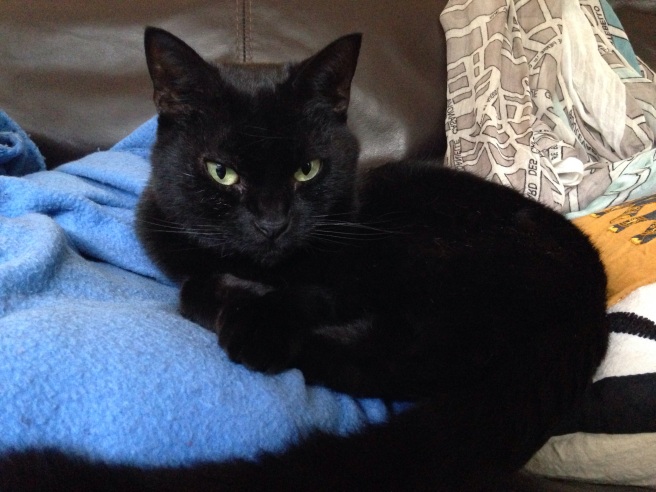 I am a crazy cat lady. Now, you wouldn’t be able to tell by looking at me (nor by smelling me). But, when I meet new people and talk turns to hobbies and pastimes, the catness gradually creeps out. Especially after a few wines. Most people grit their teeth and politely bear it. From time to time I meet people who are worse than me, and I grit my teeth and politely bear them. On the very odd occasion, someone might shuffle awkwardly from foot to foot, make their excuses and leave; this tends to happen when I thrust my iPhone in their face and proudly say, “And here’s another video of my cat being brushed!”

Louis Catorze is a small, scraggy black cat who came to live with us in 2014. He was already called Louis when we got him, but his subsequent nicknames (The Sun King, Le Roi Soleil etc.) mainly come from a silly pun on the word “cat” and the French number 14. It was hilarious at the time, as was the fact that a black cat with freakishly long protruding canines looked more like the Prince of Darkness than the Sun King. Curiously, we later discovered that he is, in fact, our 14th family cat, if you count all my childhood ones including the various strays that I bulldozed my mum into adopting. We suspect, however, that, despite his regal title, Louis Catorze doesn’t actually speak a great deal of French.

He also has the rather less desirable title of being the most expensive cat in the history of his former rescue centre, and not in a good way: due to a skin allergy of unknown source (although much of the evidence so far points to dust mites), Louis Catorze racked up thousands and thousands of pounds of veterinary treatment whilst in their care. We can only imagine the joy, the relief, the leaping up and down and punching the air, when we came along and took the itchy little money-haemorrhaging (still not quite sure about the spelling of that word) beast off their hands.

Louis Catorze now lives a peaceful life in his very own Château (actually a terraced house in TW8 but, because he is small, it must seem like a castle to him), and he spends his days sleeping, scratching, meowing at bugs like an idiot, and not doing a lot else. He often receives visitors (feline and human) at Le Château, as well as letters and gifts from people who have never even met him. In fact, he’s more popular than we are.

Nothing would delight me more than people following our blog, but please note that I am neither a vet nor a cat behaviourist. Nor am I even a particularly experienced cat owner, as Louis Catorze is only the third cat I have had as an adult. By all means ask me questions about your own cats and I will endeavour to help if I can, but bear in mind that my responses will largely be based on opinion, gut instinct and, very occasionally, hearsay and gossip. You will instinctively know far better than I, what is best for your cat. And, if something is seriously wrong, a visit to the vet is in order (even though kitty will hate you for it).