Yesterday marked the 5-year anniversary of the glorious day that Louis Catorze came to live with us.

Because of this length of time, we thought we were highly knowledgeable in terms of the many sub-edicts of Little Sods’ Law. But it seems that more and more of them progressively come to light that we never knew existed. He really is the gift that keeps on giving.

We can now announce the following new addenda to the Law:

1. If you are in the middle of changing bed linen and become distracted, even for just a second, any black cat in the vicinity will be irresistibly drawn to the unguarded, undressed white duvet and pillows.

2. The strength of the cat’s attraction to the duvet and pillows will be inversely proportional to the cleanliness of the cat.

If you are easily repulsed by gross cats, please look away now. 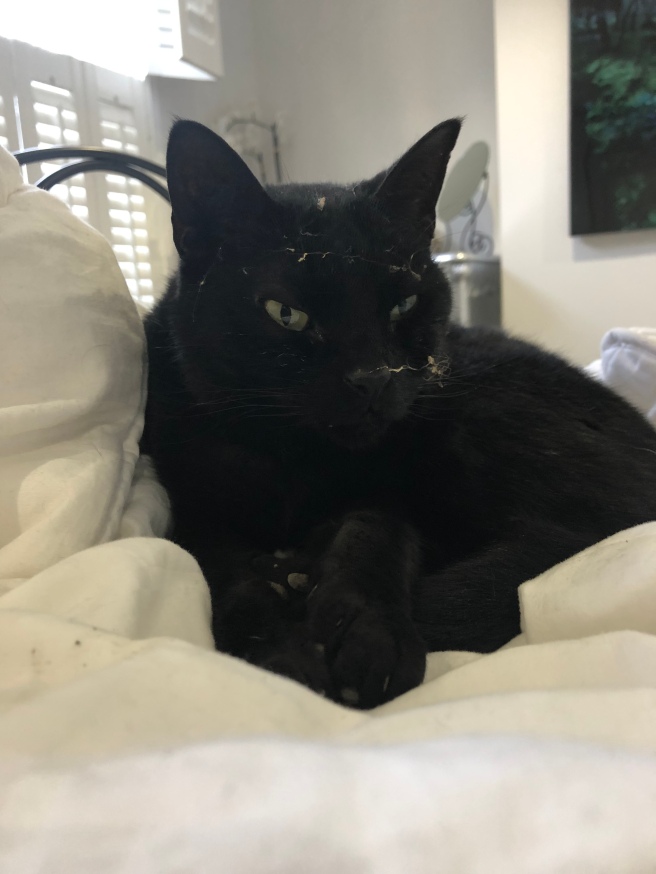 I have no idea what he did to get into such a state. Nor do I know what most of this stuff even is, although I fear that those things on his left cheek (our right), are dead spiders.

Cat Daddy: “You’re going to have to move him. I’m not touching him. He’s your cat.”

[It hasn’t escaped my notice that Catorze is always “my” cat when he’s done something bad or cost us a lot of money.]

Cat Daddy again: “Oh. You can’t move him, can you, because of your shoulder? So I suppose I’m going to have to do it?”

Anyway, the little sod wasn’t budging from the duvet and clung on as if the lives of every man on the planet depended on it. Eventually he was ejected but, somehow, in all the chaos, the dead spiders were dislodged. I now fear that they might be lurking somewhere inside the folds of the duvet. Ugh. The only thing worse than spiders is hidden spiders. IN YOUR BED.

Cat Daddy, sinking into a chair and rolling his eyes: “Oh, don’t worry, we’ll find them. First thing in the morning, probably stuck to your face or mine.”

And now I can never sleep again.

I am fairly sure that the best recovery from surgery does not involve restless nights fretting about duvet spiders. And I expect that this is all part of the Dark Lord’s grand plan to take me down – making it look like “post-operative complications” – so that he can have Cat Daddy all to himself.