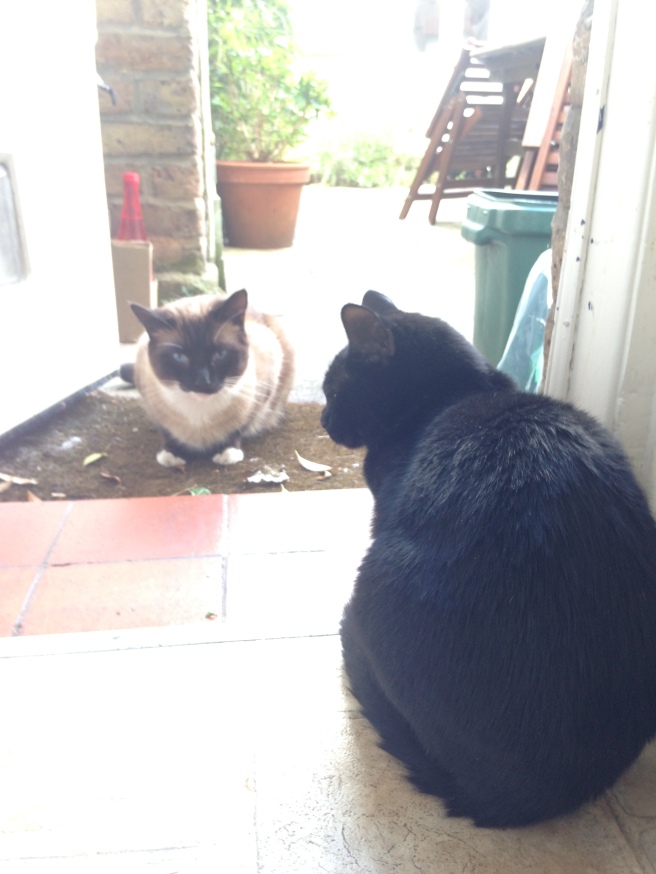 Does your cat have friends outside of your own household? And should I be concerned that Louis Catorze has none whatsoever?

When we lived at Le Palais he had heaps of buddies popping over. Some cats were positively welcomed (such as the delightful Cookie, aka The Chubby Siamese or Chubs, pictured here), others were merely tolerated, yet nobody was rejected outright, leading me to the conclusion that Louis Catorze is one of those cats who gets on well with other cats. This sounds like it ought to be inevitable but, trust me, there are some cats who don’t like any other cats at all. Our first cat, Nimbus, didn’t even like her own biological mother or siblings, and she used to hide round corners and jump out at them (in an “I want to kill you” type of way, not for fun).

But, since we moved to Le Château, and, despite us seeing a few cats during our visits when the renovation work was going on, Catorze has had something of a manque d’amitié. Obviously we’re glad that no unwelcome intruders are giving him hassle (apart from his mysterious adversary at Le Fight Club), but it’s peculiar to think that, in a street full of cats*, nobody seems to want to be Catorze’s copain. Luckily, because he’s thick, he doesn’t know this.

*Our neighbours include:
– Pensioner Pickles, a remarkably well-preserved calico cat in her 20s, who hates all other cats (including Louis Catorze)
– Titus the Biggest Cat in the World, an orange Maine Coon the size of an ox
– Catus Interruptus, a grey tabby who rudely barges between people trying to talk in the street and demands attention
– Rocky the Racist Ginge, who only gets along with all-black and tuxedo cats and who beats the crap out of other-coloured ones (including Titus)

Interestingly, when trying to explain to others what Louis Catorze’s skin condition looks like, Cat Daddy has always – completely unintentionally – pronounced it as “pariah-sis” instead of psoriasis. C’est une coïncidence?

One thought on “Felina non grata”