I often read others’ stories about how cats instinctively know when you are sick and respond by snuggling you back to wellness. Louis Catorze instinctively knows, too, but unfortunately he doesn’t give a shit; here he is, displaying his “You’re ill? Pardonne-moi whilst my heart breaks” look. 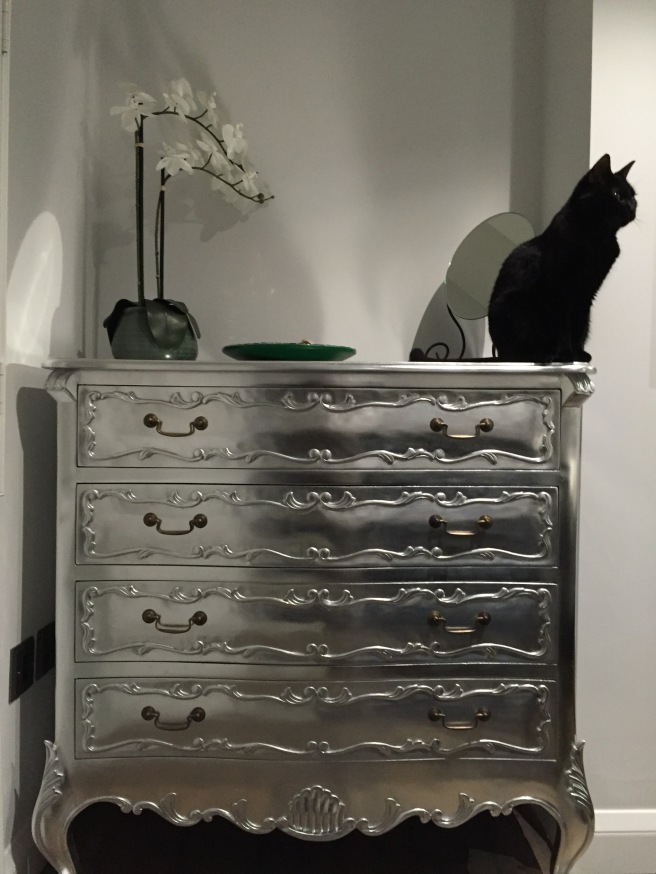 I have had a bad couple of days with a headache, sore throat and temperature. Catorze has been “empathising” by repeatedly entering and exiting the bedroom, meowing, walking up and down my body and rubbing cold, wet fur in my face. (How he manages to get wet when it’s not raining outside – pond? river? bucket of water from exasperated neighbour? – is up there with Le Triangle des Bermudes in terms of eternally unsolvable mysteries.) And this didn’t happen just once: we’re talking at least once every hour, over the course of a whole night.

As a result, far from feeling comforted by my nursemaid’s sensitive attentions, I want to kick his selfish little arse.

Naturellement, when HE’S the one who’s unwell, he’s the most miserable sod ever to walk the earth; when his allergy takes hold, he pretty much goes into hiding and we’re not even sure where he goes. This happened a lot when he first came to live with us, including during that initial period of house arrest when you get a new cat, and our reaction was to panic that he’d somehow broken through our maximum security penitentiary blockades and escaped out of the house. I would be phoning neighbours, trawling the streets shaking a pack of cat biscuits (this was before we found out that he didn’t like food, obviously), and all the while the little sod would be holed up in a dark corner somewhere within the house, sulking.

We weren’t thrilled at the thought of having a cat that nobody ever saw, but we accepted it as a consequence of our decision to have a special needs cat. Now, of course, we know that hiding away is not an intrinsic part of his personality but a symptom of his illness (although sometimes I wish he would make himself scarce between 11pm and 7am to allow us some sleep).

I’m presently lying on the sofa under a blanket, surrounded by green tea, tissues and pills. Louis Catorze just came in from outside, yelled, shook water all over me and went back out again.

They really do treat us like dirt sometimes, don’t they? Mind you, we’re the ones at fault because, time and time again, we let them.