When you order groceries online from Ocado, there’s a section at the end where customers can warn delivery drivers of potential hazards – steps, thorny shrubs, excitable dogs, that kind of thing. I never imagined I would ever need to write anything, but Louis Catorze’s love of boys – Ocado drivers are almost always male – has taken his nuisance level to new heights lately.

We had a delivery at the weekend and normally the little sod is very pleased indeed to see Ocado drivers but, this time, presumably because Cat Daddy has been away for a few days and he has been deprived of male company as a result, he totally lost his shit. As soon as I opened the door to unsuspecting Deyan driving the Apple van, Catorze decided to race in and out of the door and thunder up and down the stairs multiple times. It’s surprising how loud a 3.5kg cat on bare floorboards can be.

Deyan had clearly never seen anything like it, commenting that the cat was going crazy; then, after going through my receipt and taking my plastic bags back, he made a swift exit. And this is not the first time we have had such an experience: in the past I have had to apologise to quite a few other Ocado drivers including Amil driving the Onion van, who glimpsed a furry cat toy that notre ami had dropped in the hallway and thought it was a rat, and Gary, also driving the Apple van, whom Le Roi almost tripped up in his haste to snuggle him.

One day, Ocado will be able to just turn up, deliver in peace and leave, but I don’t think that day will be anytime soon. In the meantime, I think this wording should cover all eventualities: 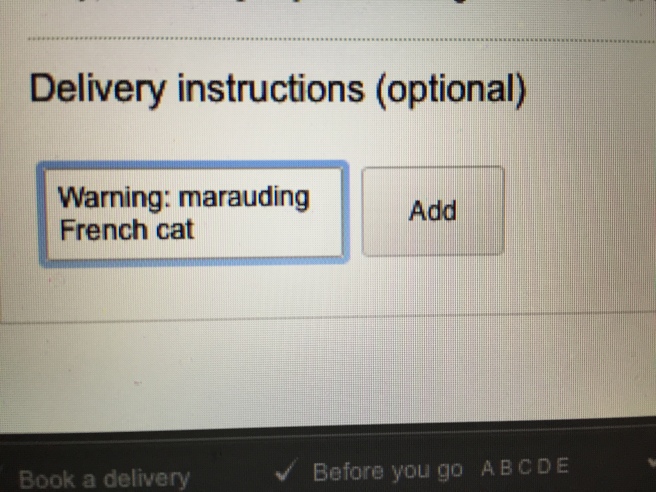