Summer is fast approaching, which means that Louis Catorze spends the vast majority of his time sitting to attention, carefully monitoring the gap between the Forbidden Greenhouse and the shed (first picture). Very occasionally he relaxes his pose and sits at ease, but his concentration does not wane (second picture). 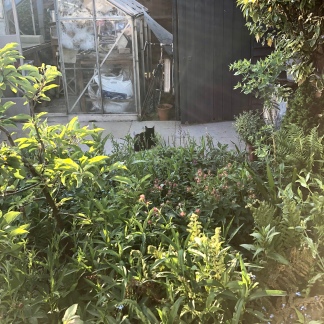 Nothing can successfully shift him from his station except someone approaching to take a photo, so these shots were very lucky indeed.

The only explanation we have for this behaviour: this must be a spot where rodents hang out. Obviously it’s great that the little sod takes his Rodent Duty so seriously – and, by this, I mean that he spends hours and hours like this, and neighbours have begun to comment and laugh – but I’m not looking forward to him bringing his panting, dismembered prey to our bedroom. Which he will.

I’m not joking about the panting. Look here if you don’t believe me: https://louiscatorze14.wordpress.com/2017/11/26/psycho-kitty-quest-ce-que-cest/

Cat Daddy: “He’s not on Rodent Duty; he’s just staring at nothing because he’s THAT boring. He’s the most inept hunter ever. He won’t catch a thing.”

Cat Daddy was really silly to tempt fate by saying this. For an “inept hunter”, Catorze hasn’t done badly since we moved here (rats, mice, a bird and, of course, the slug that was dropped onto my pillow as I slept). Plus he is highly proficient at doing exactly what we don’t want him to do, so I’d be prepared to put money on us receiving a delivery very soon.

The bin bags and the rubber gloves are primed for action … and, should the worst happen, Cat Daddy will be on disposal duty.

One thought on “Le soldat”