Usually, when things go wrong, we do everything possible not to end up there again. Today, however, we decided to give Louis Catorze the benefit of the doubt and let him have another stab at the football prediction.

And he has an unlikely cheerleader in the form of Cat Daddy, which is a surprise given how cross he was when the last attempt went awry. Not only is he championing our boy’s second chance, but he is even suggesting that perhaps we were at fault before for not understanding Louis Catorze’s strategy. Cat Daddy’s theory is that Le Roi was eating the LOSING team, not the winner. And I have to admit that it makes more sense to leave the victor intact and to obliterate the loser.

So, with Napoléon once again representing France, with King Zog of Albania flying the flag for his people, and, most importantly, with enough iPhone storage to record the event (having deleted 300 cat photos over the weekend and leaving a mere, erm, 1,000 on my phone), this time Catorze predicted … a draw. 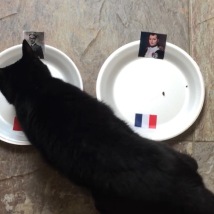 There is no way on EARTH that this could be right. I sense impending embarrassment.