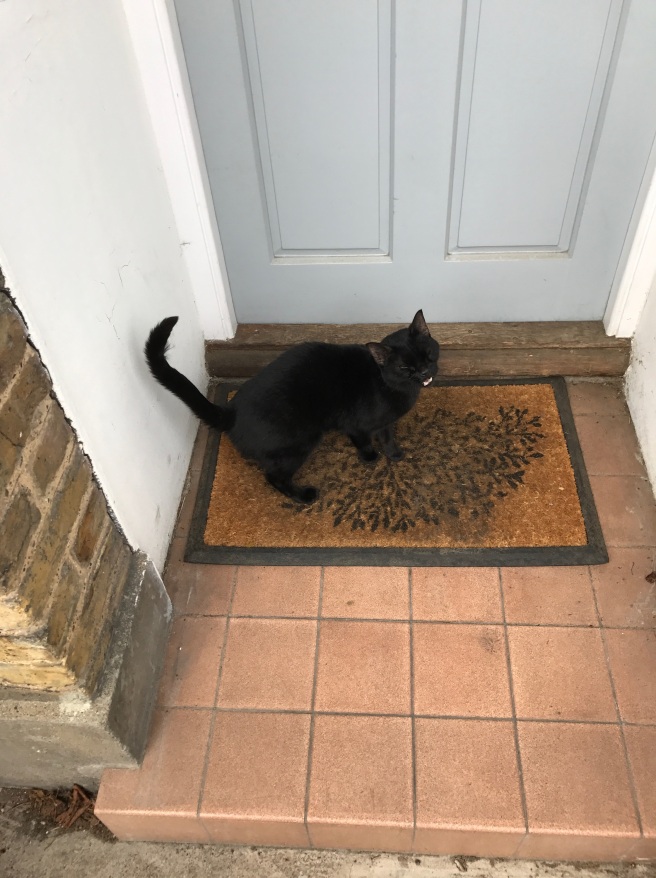 If you are, or have ever been, the owner of a black cat, you will be familiar with a certain section of Little Sods’ Law: “If you see a black cat behaving badly in a public place, it’s very likely to be your cat.” And there is an added sub-clause to this part of The Law: “The likelihood of it being your cat is directly proportional to the embarrassingness of the behaviour.”

We have been caught out here a few times with Louis Catorze, and about 758 times with his big brother Luther, and we know now not to waste our time with smug thoughts such as, “What an idiot cat! I wonder whose it is?” So, when Cat Daddy was walking home from Cocoa the babysit cat’s place the other day and saw, in the distance, a lady in the street bending down and appearing to talk to a small, screaming animal, HE KNEW.

Clearly Catorze had slipped out unnoticed as Cat Daddy was leaving for Cocoa’s place, somehow lost sight of his papa and, instead of going back to Le Château to wait, decided to pitter-patter about the streets, screaming.

Cat Daddy was so embarrassed that he briefly toyed with the idea of bidding the lady a good afternoon, pretending he didn’t know Catorze and just walking by. However, Le Roi spotted him as he approached and galloped towards him, up-tailed and screaming himself almost hoarse, so Cat Daddy had no option but to sheepishly own up. “Yeah, this is my cat. No, we hadn’t shut him out: he chose to run out. No, he’s not neglected or mistreated: that’s his normal appearance. No, he’s not traumatised: that’s his normal voice …” and so on.

And it turned out that the lady was not a passer-by but a neighbour, who had heard the unearthly screaming from her house and come out to investigate. Yup, Louis Catorze was THAT loud.

The lady then opened her door to introduce Cat Daddy to her quieter, prettier, better-behaved cat, who sat there eyeing Catorze disdainfully as if to say, “Oh, DO shut up, you undignified oaf!” whilst the little sod continued to scream. Cat Daddy then scooped Catorze up in one hand and said goodbye, apologising again for having disturbed their afternoon. The lady said, “I expect I will see Louis around.”