Cat Daddy is back after his 2-week business trip to the States, and he came home laden with gifts including this fabulous cushion cover. 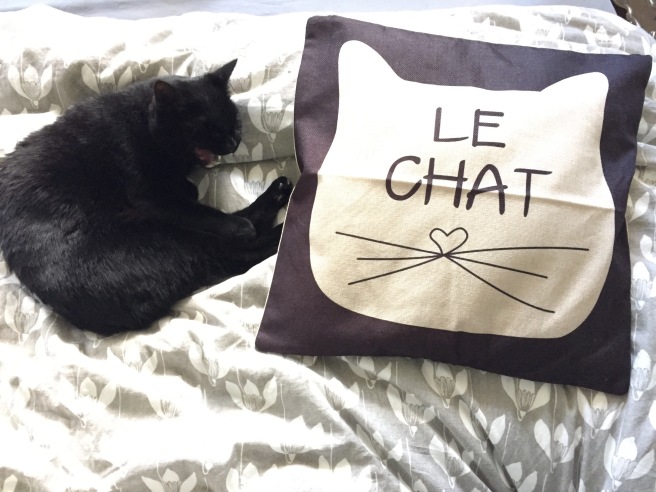 I had a feeling that his return would either calm Louis Catorze down a little or send him into an even more excitable and annoying frenzy. I was right about one of those.

The little sod won’t leave his papa alone and has been yelling, climbing all over him and staring at him with crazed, psycho eyes. And, as we all know, some cats are known to bring gifts to staff on such occasions as returning after an absence, but Le Roi has taken it a step further and has devised a sort of twisted treasure hunt.

On the morning of Cat Daddy’s return, I had to clean 2 perfectly round, 5p-sized drops of fresh blood from our bedroom floor. There were no other smears or trails, just 2 solitary drops. Yet a thorough inspection of Louis Catorze – well, as thorough an inspection as he would allow without slicing me up – revealed that he was neither hurt nor in distress.

This could only mean that the blood came from another entity. And there was every chance that this entity could be somewhere within the walls of Le Château.

My mistake was cleaning up the blood before Cat Daddy had seen it because, bien sûr, he didn’t believe me when I told him about it. His theory is that it could have been nail varnish (?), ignoring my protests of “But I only own 1 bottle of nail varnish and it’s glittery silver, not red” and the rather more pertinent “I think I know the difference between nail varnish and blood.”

So this thing, whatever it may be, remains unknown and unfound, despite our best efforts (or, rather, MY best efforts, as Cat Daddy refused to help me look for an imaginary corpse that had shed imaginary blood). And I know that, if we fail to find it by sight, in time it will deploy the next clue: the come-hither stench of death, to help us locate it by smell. Let’s hope Cat Daddy finds it before I do.